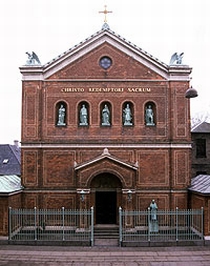 The history of the church
Denmark ceased to be a Catholic country when Protestantism was introduced with the Reformation in 1536. In the 17th century King Christian IV forbade his Danish subjects to practise the Catholic faith. This prohibition was confirmed in the Danish Law of King Christian V in 1638 and remained in force during the subsequent centuries until freedom of religion was introduced with the Danish constitution in 1849.

In connection with the legations of the Catholic countries in Copenhagen, it was nevertheless permitted to hold Catholic services, and even though these services were formally for the diplomats and their staff of servants only, the other Catholics of the city soon began to attend them.

The first real Catholic community in Copenhagen after the Reformation was established by the Spanish envoy, Count Bernadino de Rebolledo, who served at the Danish court 1648-59. At that time the priests began to keep church registers, i.e. records of baptisms, weddings and deaths. The names of the Catholic priests who have worked in Copenhagen in uninterrupted succession are also known from that time onwards. Mass was said every Sunday at Count Bernadino’s residence in Østergade.

After the departure of the Spanish envoy, the chapels were moved around between various legation residences. The Austrian legation, however, assumed a special role as patron of the Catholic community, which continued up until 1849.

In 1765 the Catholic community in Copenhagen acquired a permanent home in Norgesgade, now Bredgade 64, because the Empress Maria Theresa of Austria paid for the construction of a chapel herself. The builder was the owner of the site, F.J. Zuber, the master carpenter of the court; and when the Austrian state acquired the site in 1774, the continuing existence of the chapel was secured.

The newly built chapel in Bredgade was only intended as a temporary solution, and the Empress Maria Theresa is believed to have donated 44,000 rix-dollars to the building of a ‘permanent and more beautiful Chapel’. But she died in 1780, and her successor on the throne, the Emperor Joseph II, did not want to support the construction project.

In 1813 the community received a great donation from Peter Bianco (1745-1813), a wine merchant who had bequeathed his fortune to the construction of a new chapel and a church school.

The construction of the present-day Saint Ansgar’s Church began in 1840. The architect was Gustav Friedrich Hetsch (1788-1864), who was born in Stuttgart, and he gave it a neoclassical look in the shape of a Roman basilica. The church was consecrated on All Saints Day, 1 November 1842.

Saint Ansgar’s Church is built of red bricks with yellow pattern bonds, and the neoclassical character is expressed in the façade and the large, open interior of the church.

From 1988-1992 the church underwent a thorough restoration, in which everything inside it was restored to its original state and colour. This restoration project was carried out in collaboration with the Danish National Museum under the direction of the architect Professor Vilhelm Wohlert.

The art and furniture of the church 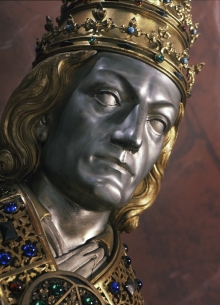 Saint Ansgar’s Church owns an extensive collection of old paintings and sculptures. Some of these are in the church and the presbytery, and others are deposited in a number of churches and chapels elsewhere in the country.

The first organ in the church was built by the firm of Marcussen & Reuter in Aabenraa, Denmark, and it was used for the first time in 1844.

The current Starup organ of 20 stops originally came from the Sion Church in Østerbro, Copenhagen, and was installed in Saint Ansgar’s Church in 1995.

The church has a single nave and is approximately 31 metres long and 13 metres wide and high. The church has 300 seats. The original pews are still in use, and the coat of arms of the Habsburgs still appears on some of them as a sign that the church was under the protection of the Austrian empire.

The large windows of the church originally had clear panes, but on the initiative of Bishop Johannes von Euch the current, brightly coloured stained glass mosaics with a gallery of portraits of saints were installed 1885-94.

On a corbel to the left of the altar of Mary stands a gilt bust of Pope Lucius I, a reliquary containing his skull. Lucius was number 22 in the list of popes, and he was beheaded in Rome in the year 254.

The painting on the altar of Mary is by Leopold Kupelwieser (1796-1862), professor at the Academy of Fine Arts in Vienna. It is a gift from the Emperor Ferdinand I.

The apse of the church

In 1864-65 Professor Joseph Settegast of the Düsseldorf school decorated the large apse, and the paintings are executed in oil fresco, approximately corresponding to Hetsch’s original plan. The dome shows the Trinity: God the Father, giving a blessing and surrounded by cherubim, and below the dove of the Holy Spirit and the enthroned Christ surrounded by the apostles. The middle of the apse shows the Mother of God with her hands folded in prayer and surrounded by Danish and Nordic saints.

After Bishop Czeslaw Kozon’s appointment in 1995, the area around the altar has been slightly refurnished, so that the bishop’s throne is now placed in the middle of the choir. The new altar and the tabernacle are designed by Professor Wohlert.

At the front of the choir there used to be two boxes with sash windows facing the interior of the church, but they were walled up in 1940. To the left is the box that belonged to the Austro-Hungarian envoy, and his coat of arms is still on the wall under the window. This box was turned into a museum in 1968. The box on the opposite side still has the coat of arms of the city of Vienna on the wall below the window.

The tower and bells of the church

Saint Ansgar’s Church acquired its bell tower in 1943. It was designed by the architect Gunnar Glahn and was provided with three bells in 1949. The largest bell is called ‘Our Saviour’ and has the inscription ‘Hail to thee, Saviour and Redeemer’. The strike note of the bell is F.

The middle-sized bell is called ‘Saint Ansgar’. It rings for the Angelus daily, and its strike note is A flat. Its inscription comes from a hymn to Saint Ansgar.

The smallest bell is called ‘Saint Mary’, and the inscription is the opening words of the canticle of the Virgin Mary: ‘My soul proclaims the greatness of the Lord; my spirit rejoices in God my saviour’. The strike note of this bell is B flat.